The President of the Center of Studies on Economic Integration and International Trade, Dr. Rodolfo Rúa Boiero, was the keynote speaker at the closure lecture of the Diplomatic Training Course of the Diplomatic and Consular School “Dr. Eduardo Latorre Rodríguez” of the Dominican Republic Foreign Affairs Ministry. The Conference: “Theory and Practice of the Negotiation in the XXI Century”, held on February 06, 2009 was the main subject addressed by Dr. Rua Boiero. Preceded by a presentation in which the Diplomatic and Consular School Director, Ambassador Reynaldo Espinal, gave a brief profile of the Center of Studies trade capacity building activities developed throughout the hemisphere, the lecture was attended by over 40 officials of the Dominican Republic diplomatic corps who contributed with their participation in an interesting exchange of views over the issues presented.

The VIII Americas Business Forum (ABF) was held in parallel to the Ministerial Meeting of the Free Trade Area of the Americas (FTAA) in Miami, USA, November 17-19, 2003.

INTEGRAL was part of the ABF’s Technical Committee, with responsibility for its Workshops organization and coordination, in which hemispheric business organizations discussed the FTAA Draft Agreement central issues, and produced recommendations that were submitted to the 34 countries Trade Ministers for consideration.

Find below the information on the work of the ABF program, its rules of operation and development of discussions in the Workshops, as well as Testimonies on INTEGRAL performance as academic coordinator of the ABF Technical Committee.

More information can be found on the websites of the Foreign Trade Information Center (SICE) at the Organization of American States (OAS), the Free Trade Area of the Americas (FTAA), and the US Department of State.

The concept of the Americas Business Forum (ABF) was implemented from the first ministerial meeting in Denver, United States, June, 1995, which marked the start of the FTAA process. The ABF was conceived as a parallel mechanism of decision and transmission of different positions held by the private sector, which is the main protagonist in commercial trade and investments.

Role of Florida International University: In the first quarter of 2003, FIU was designated by the Miami FTAA and Americas Business Forum Organizing Committee to lead the organization and management of the Americas Business Forum (ABF). The Summit of the Americas Center (SOAC) at the Latin American and Caribbean Center (LACC), together with the Center of Studies on Economic Integration and International Trade (INTEGRAL), formed and directed the Technical Committee for the ABF.

A number of business organizations of the Western Hemisphere submitted a total of
127 position papers and deliberated for two days in eleven simultaneous Workshops.
SOAC and INTEGRAL guided and oversaw these workshops and their final recommendations were submitted to the FTAA countries Ministers of Trade who also met in Miami right after the ABF.

The success of the ABF was in part due to months of preliminary preparation that
went on prior to the ABF. SOAC and INTEGRAL, and members of the Technical Committee divided the whole preparation process into major categories: information dissemination and updating; recruiting, coordination and training of workshop authorities; preparation of documents; reception and management of position papers; on site management of the ABF from November 16th to November 19th; preparation and presentation of the final
ABF recommendations to Trade Ministers.

July marked the official launch of preparation, coordination and planning of the entire
process, with the presentation of the ABF Technical Committee at the Business
Network for Hemispheric Integration assembly in El Salvador on July 9, 2003. On
August 25th, 2003, SOAC organized the preparatory seminar “Toward the Miami ABF
2003”. This seminar convened a range of business, diplomatic and government
authorities to examine the real prospects for meeting the FTAA January 2005
timetable.

SOAC-INTEGRAL started recruiting ABF Workshop Authorities as early as July. Forty four business leaders from the Hemisphere were selected and invited to preside the ABF workshop sessions. Since then, close and constant communication was established between SOAC-INTEGRAL and the Workshop Authorities, in order to prepare them for their arrival to Miami in November.

Starting on August 26th through November 13th, SOAC and INTEGRAL also conducted a total of five sessions for workshop authorities in what were known as ABF Rapporteur and Vice-Rapporteur meetings that took place in FIU installations, White & Case offices and Steel, Hector & Davis offices, downtown. These meetings were the precursor to an efficient communication network that proved crucial during the entire process. Under close Technical Committee supervision, the eleven Vice-Rapporteurs and some of Miami local Rapporteurs gathered during these meetings to discuss and start preparation of the Workshop Discussion Guidelines. These Guidelines were based on the position papers received and the Second Draft text of the FTAA agreement, and made available to all participants in book format in three languages during the ABF.

All reception, management and codification of position papers presented by business
organizations were handled by SOAC-INTEGRAL. Papers in English, Spanish and Portuguese were read and checked for compliance with the rules of position paper presentation.

All complying position papers were then categorized per workshop, posted on the
ABF website, sent to translation in the two other languages, distributed to Vice-Rapporteurs for the production of Workshop Discussion Guidelines, and finally filed in SOAC’s ABF repository. The abstracts of all complying position papers were then gathered in a book of abstracts which included translations in three languages. This book was also made available to ABF participants during the event.

A final Workshop Authorities coordination meeting took place on November 16th. At
that time, all ABF-2003 Workshop Authorities met for the first time in a useful session aimed at introducing technical committee members, and describing the timeline, roles of each member and management procedures that would lie ahead in the ABF process.

The ABF consisted of a series of eleven simultaneous Workshop sessions that started
on Monday November 17th and ended on Tuesday November 18th. All workshops met
in seven individual sessions. Each of the eleven workshops successfully concluded the production of a recommendation documents that were then assembled during
Tuesday night in a single, three-language, ABF Recommendations book and CD to be
presented to the FTAA Trade Ministers, on Wednesday, November 19th.

The Miami ABF 2003 concluded with the successful production and presentation of
the ABF Recommendations to the Ministers of Trade of the FTAA countries in a plenary session. During this round table style session, a group of business leaders from the Hemisphere transmitted the most salient issues regarding the FTAA process that affect the business community, such as the difficulties of finding a common ground in terms of intellectual property, the need for market access, mechanisms sought for cooperation among sectors and among countries and the need for inclusion of the business recommendations in the drafting of the FTAA agreement. In exchange, the Ministers of Trade answered some of the queries regarding the current status of the negotiations, especially with regards to the level of ambition in terms of the originally envisioned FTAA and the new reduced scope of negotiation and/or redirection on fields that appear will be harder to get consensus. The big protagonists in the negotiations are th

During the three days of the ABF, eleven members of LACC personnel representing
some of its different units (Cuban Research Institute (CRI), Institute for International Professional Services (IIPS), and Summit of the Americas Center (SOAC)) assisted in the conduction of each of the eleven workshops. Along with this group, four Miami-Dade County recruited volunteers cooperated in the effort. Directing members of the Center of Studies on Economic Integration and International Trade (INTEGRAL) also collaborated during the process as members of the ABF Technical Committee.

Dr. Eduardo Gamarra, Director, Latin American and Caribbean Center, Florida International University; currently Director of NewLink Research at NewLink Group
“(…) During the Spring Semester, President Maidique and Provost Rosenberg asked LACC to provide the technical assistance to support the organization of the 8th Americas Business Forum (ABF), which parallels the Trade Ministers deliberations on the future of the FTAA. (…) As I fully expected, LACC lived up to the expectations of President Maidique and Provost Rosenberg. I turned over this very difficult assignment to our Summit of the Americas Center (SOAC) realizing that it would essentially involve organizing the ABFand knowing from the outset that LACC and FIU would never quite reap the recognition that we would merit. (…) The comments and accolades we received from everyone including Ambassadors Lauredo, Cobb, and others are not enough to recognize the quality of our efforts this week. LACC’s performance this week at the ABF was absolutely stellar. I was privileged to observe how months of hard work by SOAC’s staff translated into a seamless meeting. (…) Finally, I also want to express LACC’s profound gratitude to our extended Argentine family. Rodolfo Rua, Liliana Otero, and Carlos Restaino from INTEGRAL provided their absolute best during this effort. We are privileged to have had the opportunity to work with them once again. I hope we will soon be involved in another joint project. You have all reminded me this week why I work at LACC. It is because your efforts and dedication make my job the best at FIU. Thanks again to all of you. I am proud to be associated with each of you.” (November 21, 2003)

Dr. Mark B. Rosenberg, Provost & Executive Vice President Founding Director, LACC; currently President of Florida International University
“I want to second what Dr. Gamarra has indicated here!! Congratulations on a job well done!!!
You should be very proud of what you just accomplished. You are participating in an historic process and carrying on the fine tradition of LACC’s deep engagement in issues of consequence for the hemisphere!! Keep up the good work!” (November 30, 2003)

Dr. Shanker Singham, Esq., Chairman International Trade & Competition Group, Steel Hector & Davis LLP; currently Partner in the economic regulation group of Squire Sanders & Dempse“Let me second Danny’s comments. While the eventual ministerial declaration may not be what we all wanted, at least the process is still alive. The work you did on the ABF was great – it was easily the best ABF yet.” (December 01, 2003)

Raul R. Herrera, Head, Latin American Practice Group, Winston & Strawn, LLP
“Just a short note (…) to once again convey my deep congratulations on your organization of this most important event and offering me the opportunity to participate on the Investments Workshop”. (November 21, 2003)

The program focused on the proliferation of regional trading arrangements, particularly within the Western Hemisphere and between countries in the Western Hemisphere and countries in other regions. Participants had the opportunity to attend presentations by Peter F. Allgeier, Associate U.S. Trade Representative for Western Hemisphere; Rodolfo Rúa Boiero, President of the Center of Studies on Economic Integration and International Trade from Argentina; Angel Leaman, Trade Commissioner of Mexico in Chicago; Carol Fuchs, Director of Customs of Motorola, Inc.; Mildred Cardona, Corporate Attorney of Caterpillar, Inc.; and Jerry Cook, Vice President International Trade of Sara Lee Branded Apparel. Professors Mark Wojcik and Peter J. McGovern, both from The John Marshall Law School were the panel’s moderators.

Important issues were addressed, mainly about economic and legal challenges and opportunities that regional trade agreements present to companies and individuals seeking to do business in the region.

“Regional Arrangements: a Practitioner’s Roadmap” – Presentation by Rodolfo Rúa Boiero, President of the Center of Studies on Economic Integration and International Trade, from Argentina. 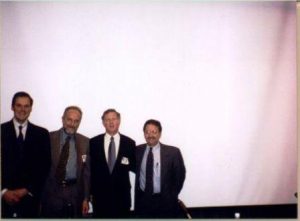